That Which Does Not Kill You...

One of my younger sisters is turning into a nutritional and exercise rock star. She has dropped 30 pounds in 3 months. In a phone conversation, she mentioned to me that she started running. Needing some motivation in the exercise department myself, I asked her if she wanted to run the 2 mile run at our town's fall festival. Which brings me to my problem...

I am mortified at the very thought of running in front of anyone. It could be the slight complex I have about having big boobs. It could be the fact that I have to strap those babies in so tight that it defeats the purpose of exercising because I will pass out from lack of oxygen from multiple sports bras that constrict my lung capacity to about 50 percent. It could also be the fact that my face turns RED from my body's amazing lack of ability to sweat. I really don't want to go to the gym only to pass out because of lack of oxygen and have someone call 911 and make the paramedics come so they can cut the sports bra(s) off of the passed out woman with the tomato red face. It is not a pretty picture in my head. So, there, I've confessed to the world one of my worst fears.


That being said, I've got myself into this running mess and I've got to save face by training my way out of it. Good thing I have a treadmill in the basement. I've also discovered that I like to run after dark...it's so, you know, dark and it is hard to see what color my face is in the dark.

The other thing that motivates me is a challenge. As a SAHM, there aren't many opportunities to set a high goal and reach for it. Sure, you can challenge yourself to actually FINISH the laundry... but the day to day stuff doesn't really count to me. Every now and then I need something else to think about.

I ran in this race once before. It was after baby number 2 and I was in need of motivation at that time, too. I didn't ever run the actual race roads until race day which was a major mistake because I didn't realize that there is a HUGE hill at the last 1/2 mile of the race. We are talking a mountain of a hill. Whoever chose the route for this race liked torture or maybe "he" thought that 2 miles was too easy and we runners needed a challenge. Whatever the reason, I might hate him, whoever he is.

I have to admit, it feels good to finish and ultimately that is the only reason I would put myself out there and do something so crazy. 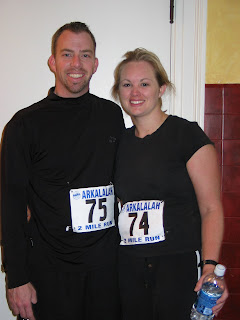 Last time Doc was my cheerleader and this time I want to
be my sister's cheerleader. Besides that, see the picture of me and Doc, that was about an hour after the race and my tomato face was ALMOST back to normal already!

By the way, my Dad ran a marathon a couple of days before my 2nd baby was born. (How many grandpas can say that!) I guess I didn't inherit the running gene from him. Wish I could switch that gene out for the hairy arms gene that came from that side of the family! But what do you do?

Oh my gosh! This is hilarious! I am chanting "wax and run." I totally understand! :)

So funny! I am giving you "hoorays" from across the internet!

I am going to laugh about this all day long...wax and run, baby!! You can do it!!