Do you ever have one of those days? You know, the kind that brings out the inner 3 year old inside of you. The kind that makes you want to stick out your tongue at the world and crawl back in bed so that you can have a fresh start the next day. I have had a couple of those days this week.

The worst of which began with "Maaawwwwmmm" echoing down the hallway into my sleeping brain. I hollered back, "What?" The answer came back, "I went poop and peeeee..... and Mom, I had an accident." Nothing starts my day off right like rolling out of bed to clean poo off of my 4 year old and every surface he came into contact with, because he didn't want to stop playing Nintendo long enough to make it to the toilet. Just for the record, BOYS ARE MUCH MORE GROSS THAN GIRLS. Boys do the most unexplainable, disgusting things.

I got him cleaned up, fed, and off to school. I reasoned that the day could only go up from there! I tried to think positive. But all that went out the window when Ladybug woke up and was screaming. I came in to find round two of the poo poo messes. ALL OVER. So off to the bathtub we went and then I had to clean up all the sheets and do the laundry and remake the bed. Another disaster cleaned up. I had to get back on track.

I had to tackle the next project. Lou Lou's school room had not been used for school for a month because it was a disaster after Christmas. The same school room serves as my craft room and all the wrapping, crafting, and decorating had exploded all over the entire room. I decided I would finish cleaning it up. Then I decided to add a little "skirt" to my desk area to hide all the stored junk underneath it. What should have been a simple job turned into a time sucking pain in the hiney. 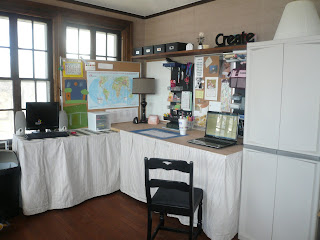 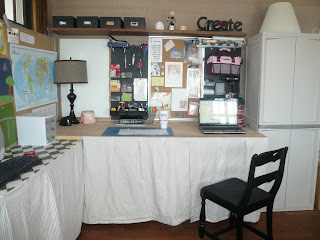 While I was in the middle of that, Bub came back from school and appeared with green all over his mouth. I asked him the most important question...IS THERE A MESS? He said, "No, Mom." But being a Mom for a few years and using my awesome deductive reasoning skills, I came to the conclusion that he was most likely fibbing to save his own hiney. So I left my skirting frustration to go to find the next. And there it was in all its glory. Green and red sprinkles mixed with M&M's. ALL OVER the playroom. Even in the couch. Under the cushions. The same couch that I had just vacuumed out and cleaned up 2 days ago. I was really ticked. He was sent to his room until lunch time because I was so mad, I didn't want to do anything rash.

I cleaned up that mess, got the kids lunch and then laid them down for bed except Lou Lou who went to the Nature Center with Birdie and her kids. Then I went back to the previous project. By this time I was pretty irritated. Nothing had gone according to plan and I was hoping the afternoon would go a little better. When I was just about finished, Birdie brought Lou home and came in holding a Diet Dr. Pepper (LORD BLESS HER SOUL) and some packages that were sitting on the porch. 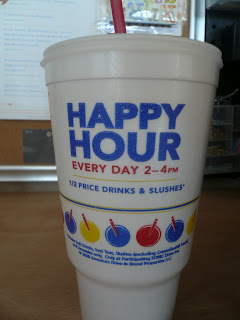 At this point, I thought the day was looking up! The package was an "inspiration" bikini I had ordered, with the hope that it would help me get off my hiney and back into the gym. (One day I will be able to wear a bikini again if it kills me.) I asked Birdie if she wanted to see it and eagerly ripped open the package to find this... 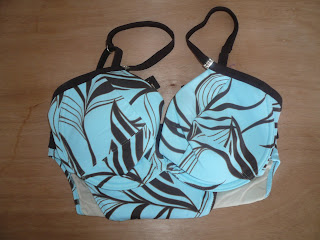 which would have been great, except I ordered this... 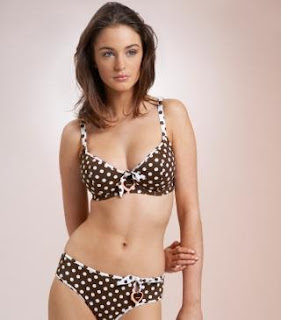 Dumb swimsuit company. One more thing to put on the to do list. #247 Return swimsuit.

Birdie left and I went and finished the skirting project. Then, like an idiot, I decided to take a chair in that room that had this fabric on it... 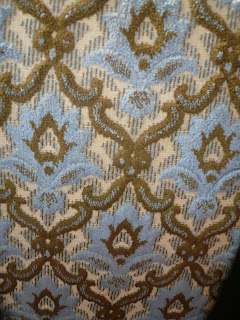 And simply put on a slipcover that I had ordered for it. Easy right? Sure except it wasn't wide enough. So, after I had wrestled the stupid thing and got it as far on as I could get it, I decided I would MAKE it work. I took the scissors and cut directly down the middle of the back. 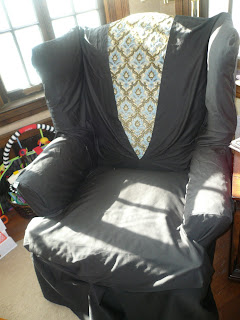 My hope is that I can take this... 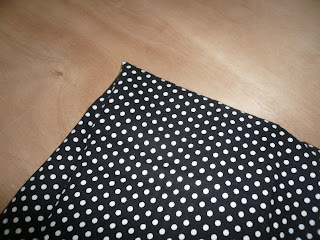 And add it to the chair cover like this... 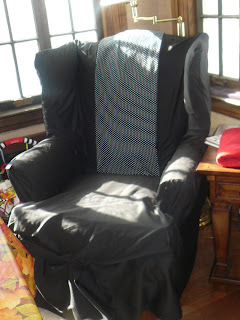 And make it work. However, I decided with the way I my day had gone, it would probably be wise to NOT start on that little sewing project. I decided to call it "a day" on the project front. I gave up, went and cooked dinner, fed and bathed my kids and put them in bed. Then, I took a bath and climbed into bed with the hopes that the next day would be better because it HAD TO BE! And thankfully it was!

YIKES, WHAT A DAY. THERES ALWAYS TOMORROW. LOVE THE SKIRT!!! HUGS FROM MAINE

I love the "Crappy Day" title. I am singing "Oh Crappy Day...when I washed, I washed the poo away."

I hope this week is much better! :)

The craft room is taking shape - it looks like a great place to create! I hope the plan for the slipcover works for you - great idea, by the way!

And...I was thinking...maybe we should train the boys to poop in the garden/lawn...I hear it's great fertilizer. Hee hee. Maybe EJ would help with the training and/or transfer of said poo to the appropriate places?

Sorry you had such a bad day but glad the next day was better.

Man, your day stressed me out. And that part about sending Bub to his room "until lunch"--I couldn't believe lunch hadn't come and gone yet!

But, your skirting project turned out really well! And that fabric on your chair? We used to have that fabric on a chair in my living room growing up! Aww, memories.

Oh you poor sweet thing! What a day! And right from the get-go, too. But what a good mom you are and how creative are you with that great craft room! Wonderful!

I really enjoyed the 'bio' you did on 4 Sisters. Your children are so beautiful and seem like so much fun. What a wonderful family you have!