Our Body: The Universe Within

*WARNING: If you get grossed out by graphic pictures of anatomy, please don't ready this post. You won't be my friend any more and that would be really sad. So just don't. Ok?*

One of the great things about home schooling is that you don't have to learn within the context of regular curriculum (although we do use one). We have the freedom to teach Lou Lou however we think she will best learn and we also have the opportunity to help her pursue her interests.

Lou Lou is a little lip gloss loving, fashion conscious girly girl but she has a passion for anything having to do with biology (human or animal). She has always had a strong stomach and things that gross me (and even her Dad) out, interest her. She wants to know how things work and why things happen the way they do. We discovered this about her one day when she was 5. Doc was chipping old glaze out of a window on the 3rd floor and slipped with the putty knife cutting his hand pretty badly. He had his cell phone in his pocket, so he called the house phone and asked me to meet him upstairs with a towel because he was getting blood everywhere. I grabbed a towel and ran up the stairs with Lou trailing behind me. Doc showed me his wound and Lou was right there beside me, standing on her tiptoes, trying to see. We went into the bathroom to clean it up and she ran somewhere else. I figured the gushing blood was a little too much for her but man was I wrong. She wasn't running away, she was running to get a stool so that she would be tall enough to see what the extent of his injury was! He ended up getting stitches in the palm of his hand? Fast forward weeks later, his hand is healed and little Lou is sitting there pulling his stitches out one at a time at the kitchen table.

This year, with home schooling, we are responsible for teaching her science and we had an awesome opportunity. This exhibit was at a nearby children's museum... 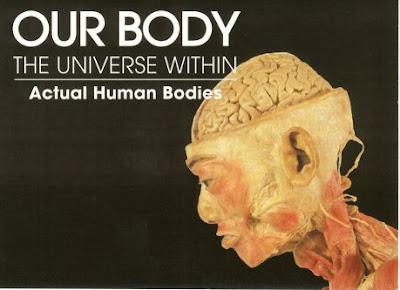 Doc planned to take Lou last Wednesday. That morning, I told her, "Lou, if you get grossed out or have had enough, just tell Dad and you can leave. I don't want you to get creeped out." She said, "Maawwm, I won't get creeped out. It's cool." 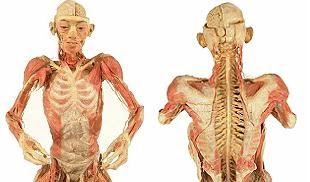 These are some of the things that they saw at the exhibit. 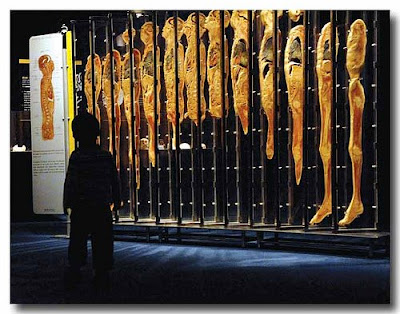 When she got home that night, I asked her what she thought. She told me that it was really cool and only one thing grossed her out. There was a display of a person's arteries and veins and the person was holding a hanger with a suit of skin hanging from it. Now, she didn't think that was too cool. It kind of crossed the line from educational into sick entertainment. 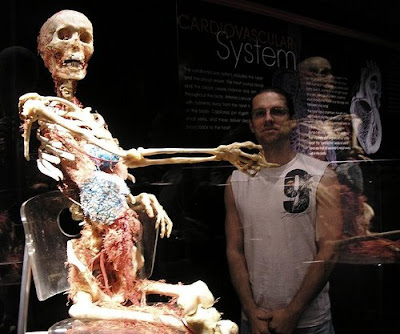 It is so funny to me that, that is the only thing out of the whole exhibit (they skipped the reproduction section) that was disgusting to her. She is sooo going to be a doctor or something like that when she grows up.

I'm just thrilled that, because we home school, not only did she get the opportunity to see this exhibit and learn first hand about the human body, but she also got to spend a day with her dad in the middle of the week! He got the opportunity to show her how we were created by our God (it just couldn't be a coincedence that all the systems fit into place to create an organism as complicated as our bodies.) It was an educational and faith building trip in one! What a blessing!
Posted by DW on Wednesday, January 14, 2009

I SO want to see that exhibit. I've seen human cross-sections at the Museum of Science and Industry in Chicago....but it pales in comparison, I am sure. I love the biological sciences...especially oddities....but I could NEVER have been a physician...I'm not great with breaking personal space boundaries...and I am sure you would have to touch someone at some point. lol. I think you definately have a little Dr. on your hands. What a GREAT experience for your daughter and husband! And I LOVE that homeschooling allows you to focus on her individual interests...that is VERY appealing.

Neat-O! I am so excited to homeschool our boys. Thanks for paving the way in our family!

I'm glad Lou Lou finally got to see that - I can only imagine how excited she was to get to go and to spend a day with her Daddy all to herself. I can't wait to see what God calls her to do.

The warning at the top of the post is hilarious! I haven't seen the exhibit yet. My son saw it in Boston when he was in high school. Back in the 'old' days he wanted to be a doctor.

When my son was 4 years old, he told me he wanted to be a doctor or an astronaut or president or a trash collector. Watching those guys on the backs of those cool trucks is too magical when your are 4! When he was 6 he saw a TV show (Earth 2) that had aliens coming out of the ground. He told me he was crossing astronaut off his list! When he was 11, he was elected most likely to be president by his 5th grade class. (How cute is that!) After 1-1/2 years in college he isn't so sure! :D (Organic chemistry had him up nights last semester, and he has OC 2 this semester!) Although, he still won't change his major! (microbiology)