Alright, last vacation post, I promise! Something I should probably share with you readers is that I am a terrible scrapbooker. I have 2 of our 4 children's 1st year scrapbooked and that is it. So, when I began to blog, it dawned on me that this is pretty much a virtual scrapbook. So sometimes it may seem that I beat a topic to death...take for instance vacation. I know that one or two condensed posts about our vacation would do for my readers but frankly, this is my memory keeper and if I want to wallow in the memories of a week with my husband in the Florida sun with our friends, you will just have to forgive me!
So, that being said...

The last day in Florida was just as great as the rest! Kristin and Tony made pancakes, bacon and sausage for breakfast! Yum! And to make things even better, the guys did the dishes. (And Doc did our laundry while I played later on in the day!) 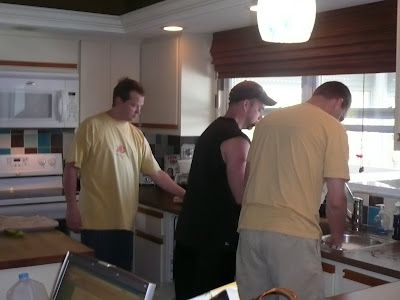 After the guys did the dishes and cleaned up, they realized that there were leftover pancakes and they had a brilliant idea! Tony and Doc headed to the dock to feed the fish. They were pretty sure there were lots of fish around there because random people would anchor nearby and fish. Being Midwesterners, they didn't realize the major flaw in their plan....it's name was SEAGULLS. They came walking down the dock with food in hand and those birds had their number. The pancakes never even hit the water. Those seagulls caught them midair and then proceeded to pester the guys until they ran out of pancakes! 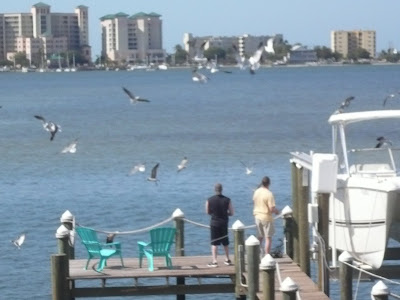 After I laughed at and took photos of the seagull incident, the girls and I headed out for a little girl time! Happiness just might be a convertible. It was warm and windy and beautiful! 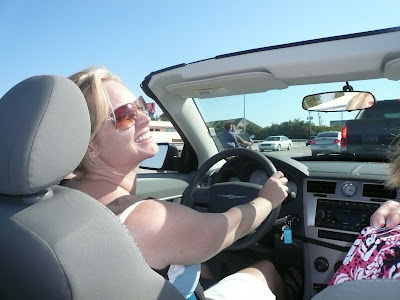 We went to a spa called Vincent's. It was deceivingly 80's on the outside and beautifully modern on the inside. Laura the pinup girl got called first. She was getting a massage while Kristin and I opted for pedicures. While we waited for our turn, we went to the "Energy Bar" for a drink. We were hopelessly lost in the choices when the owner/drink maker asked if she could make my preggie friend a drink. She asked what Kristin liked and K told her orange juice, blueberries, bananas. The owner said she would whip her something up! After she presented K with a gloriously healthy smoothie, she looked at K and said, very seriously, "when you come back, make sure you don't get any drinks with the syrups...they have ASPARTAME. I don't want your baby to get....." K finished her sentence, "mutated." "Well," she said, " you know. It's just not the best when you're pregnant."(She lectured the doctor.)

Kristin and I both laughed to ourselves and after we were out of earshot, Kristin looked at me and said, "Aspartame! So, do you think she'd look down on me drinking 2 or 3 Diet Cokes a day?" 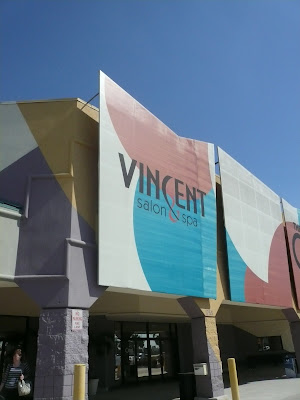 After a wildly relaxing time getting pampered, we jumped back into the convertible and headed back towards the house, stopping at a souvenir store on the way! You know it is in the parent's handbooks that you must bring back gifts to your children after you have been gone on vacation." 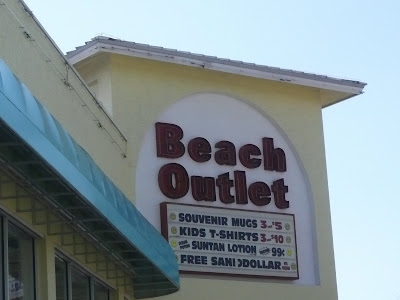 We made it back in time to soak up some last day sun! Our menfolk were very happy to see us! 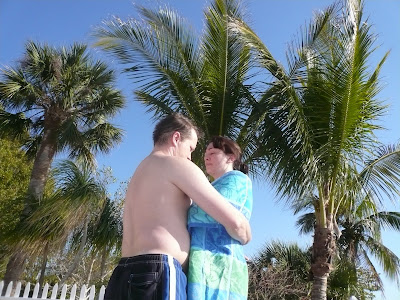 And we were glad to see them! Especially him! 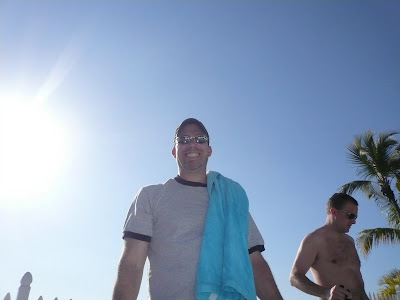 I told the girls, I need a swimsuit, a cookie and a Diet Dr. Pepper and my happiness will be complete! 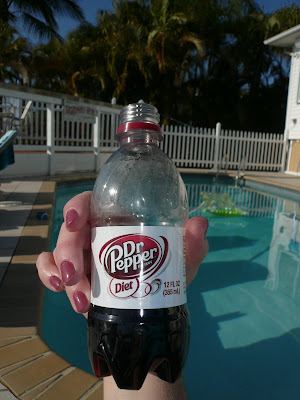 Didn't my pigs turn out cute? 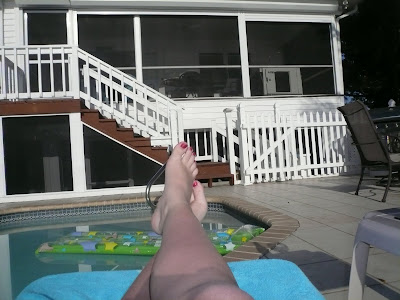 I reached a state of COMPLETE relaxation very quickly. Having my feet rubbed helps with that and don't judge me when I tell you.... 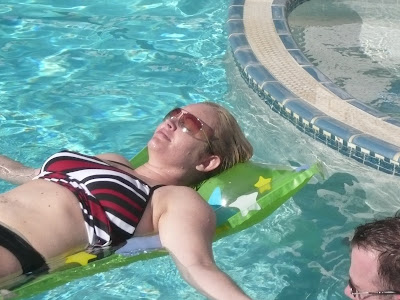 this doesn't hurt either! 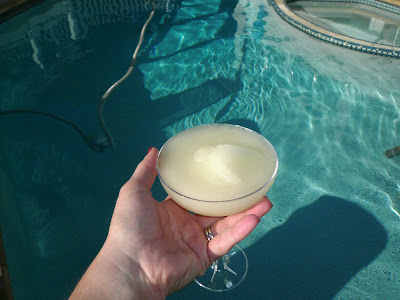 The boys left and went to the grocery store for dinner fixings. We had a little more girl talk and then enjoyed the sunset when they got back! 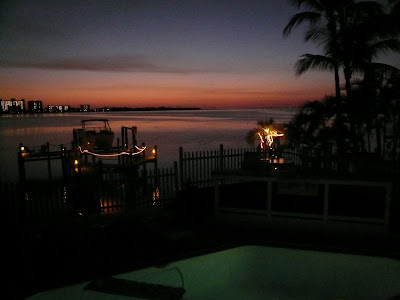 We had dinner poolside. Tony made the most delicious dinner of steak and veggies! 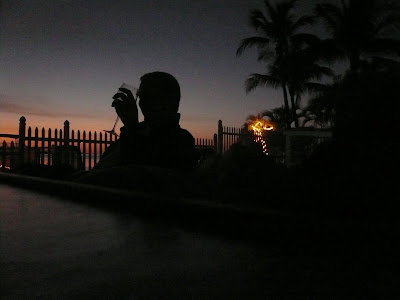 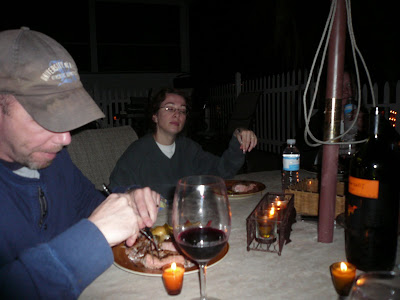 After dinner we had one last wild and crazy idea to end our vacation.... 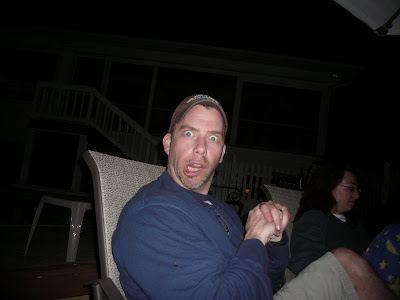 we decided we should cross the bridge to Ft. Myers Beach and get henna tattoos! A little reminder for a couple of weeks (until they fade away) of the great time we had together! 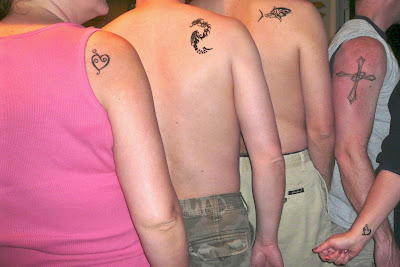 Don't know how I missed day 5 but it didn't come up on blogger.

Looks like y'all had a wonderful time. A little bit of everything. Thanks for taking us with you! :)

I was so glad to learn they were henna...I started to think my clean cut sis came home from vacay with a tat! :)

I don't know if I ever would have left the pool! I LOVE renting condos with friends, hanging out, cooking meals together....makes you feel like a college kid again....oh, wait, I think I WAS a college kid last time I did that!