The same afternoon that we enjoyed the family togetherness from my previous post, I took this photo... 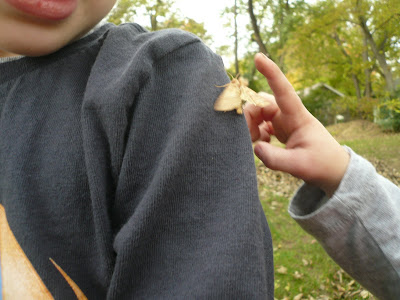 It reminded me of another moth encounter...
Two summers ago, we were vacationing with our residency friends, in Tennessee, at a vacation home. Doc and I went out to the car to get some stuff, late one night. On the way back inside, Doc suddenly stopped in his tracks and started yelling and shaking his head furiously. He shouted to me, GET IT OUT!!!!

Now, it is a little known fact that I struggle with a severe case of Inappropriate Laughter Syndrome. It just jumps on me and is uncontrollable at the most inopportune times. Turning around and seeing Doc jumping up and down, banging his hand on the side of his head and then shaking it furiously like he was a man possessed, triggered a laughing attack like none I'd ever had. As you can imagine, the laughing did not help. It made Doc even more aggravated which in turn made me laugh even harder.

Finally, he said, "HELP ME...A MOTH FLEW INTO MY EAR!!!" Fortunately, among our friends that were there, 3 of the 4 were also doctors. I ran in and got our friend Kristin out of bed... 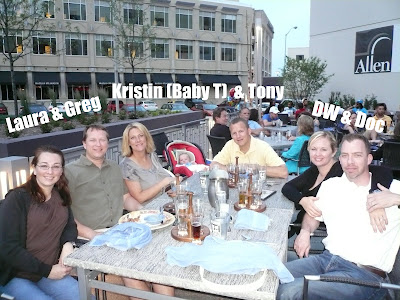 Me: "Kristin,(haaaahaaah) are you awake? (haaahaaa)"
K: "Yeah."
Me: "(Haa Haaa) Doc, he (hhaaa haaaaaaa) has a moth (hhaaaa) in his (heeheeeee) ear. He needs help to get it out! (HHHHHAAAAAAHAHhAAA)"

Doc had made his way to where we were, by this time. Kristin hopped out of bed and found some tweezers. She reached into his ear with the tweezers to try to extract the moth but unfortunately when the tweezers touched the moth, it sent it into a flurry of wing flapping against Doc's ear drum. Doc yelled, "IT DOESN'T LIKE THAAATT!!!!" which made me laugh even harder. By this time, Kristin was trying to control the laughter, as well.

Kristin told us that the tweezer method wasn't going to work. "If I were in the ER and saw this, I'd use a syringe to flush it out," she said. Tony, Kristin's hubby, came out of the bedroom and we started rummaging through the closet. He found a first aid kit on the top shelf. By some miracle, there happened to be a syringe in the kit.

We made our way into the kitchen where Kristin filled the syringe with water and squirted it into Doc's ear a couple of times until the moth moved out enough to get a good hold on it with the tweezers. She slowly removed the moth, who was wet and maybe a little bit waxy, but still flapping like mad. 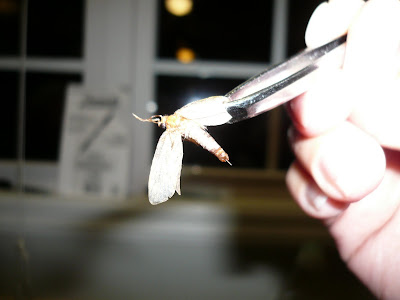 Doc was so relieved and could finally join us in our amusement at the situation. Seriously, how often do you see a moth fly straight into someone's ear! How weird is that?! 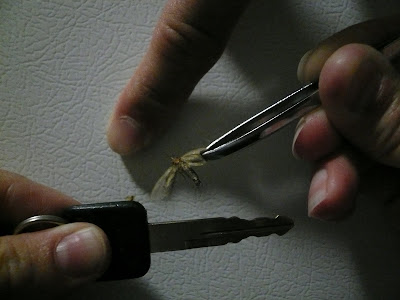 That is extremely creepy. Seriously, what ARE the chances? That was an appointment. :-) Poor Doc....now he has an empathy built up for those with critters in their ears...that may come in handy some day.