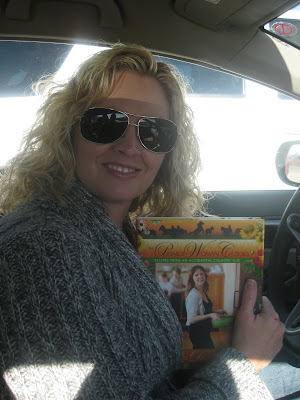 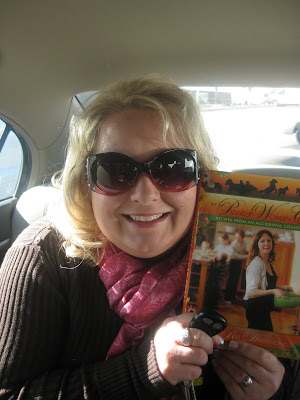 and Pretty Princess, loaded up in the car and headed South. 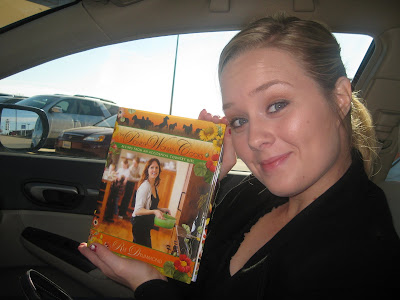 Destination: Brace Books in Ponca City, OK.
Mission: To meet Ree Drummond and obtain her autograph in our nice and shiny new copies of her awesome cookbook. 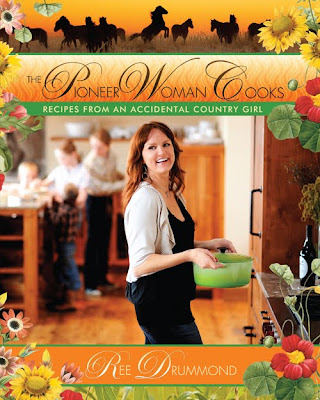 We decided to get there early for two reasons. First, we did not want to be at the end of the line and wait for hours in a line to get a chance to meet her (although, we probably would have) and second, there is a coffee bar in the bookstore. 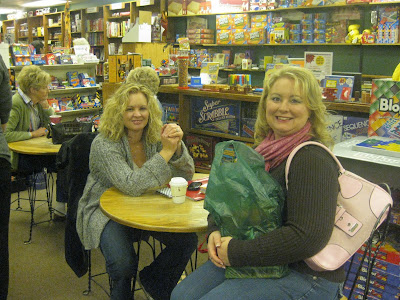 The Brace Bookstore was brilliant. They handed out these nifty numbers and everyone shopped and milled around until their number got close and then got in a short line to meet Ree. It was much better than waiting and getting irritated at line cutters and place savers. 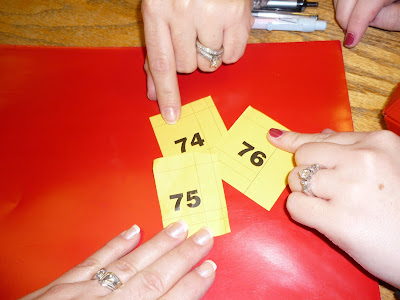 I might add that it was also a brilliant marketing move for the bookstore. The women passed the time browsing books, picking out Christmas presents and drinking coffee, in short, spending money that would have stayed in their pockets if they had been forced to stay in a line! Bravo, Brace, Bravo!

While we hung out, I jotted a note to Ree, just thanking her for making my morning coffee a much more entertaining experience because I get to read her blog! 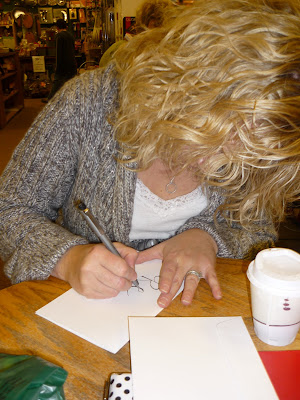 Then, I stuck it with a little package of LOVE cookies and a cookbook that has our family recipe for the cookies in it! Pretty Princess said I was bordering on being a crazy fan by bringing her a present. If bringing people love cookies is crazy, break out the straight jacket, I'm certifiable. I say, "Spread the LOVE people!" 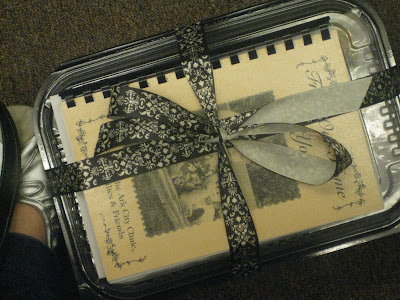 Farm Chick was anxiously waiting!!! Finally, Ree entered the building! She is just as charming in person as I imagined! 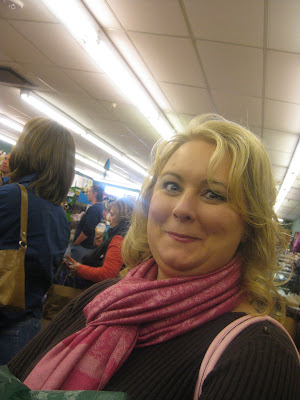 We got a kick out of watching people. The guy there in the ball cap didn't seem like a typical PW fan but upon further observation, I noticed that indeed, he was toting around a couple of copies of the cookbook. 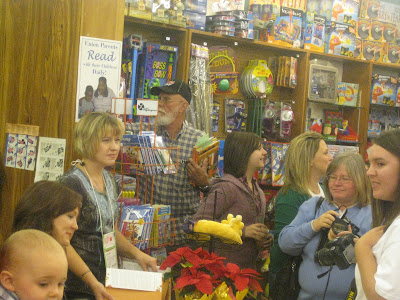 I had to giggle when he (and his wife) got their turn to talk to Ree. He told her, "I'm missin' an important ballgame right now." 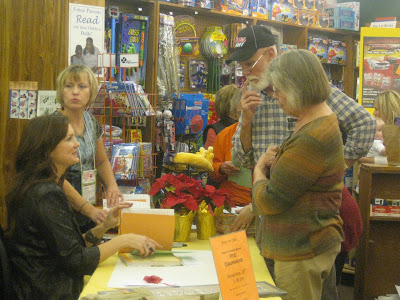 Which reminds me, to pass the time (and admittedly, to amuse ourselves), we decided to write down the crazy things we overheard, including...

(Things said to Ree...)
"I made your Cheesy Chicken Spaghetti last night. We cook just like you do!"

"If I'd have realized you were going to be here, I'd have brought the 3 cookbooks I have at home!"

(Things said by women standing in line...)
"My nervous peeing will probably kick in when I get up there."

"I just went in the basement and started drinking."

Anyway, back to the book signing, someone brought out the big guns...two babies (which is Ree's weakness) dressed in her honor. Notice the P and W on their shirts. Way too cute! 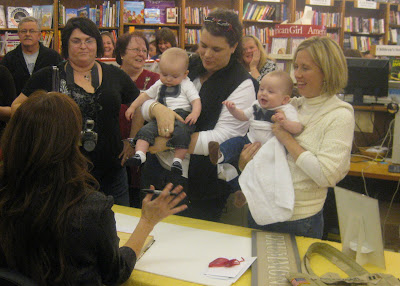 Their socks alone were too sweet. 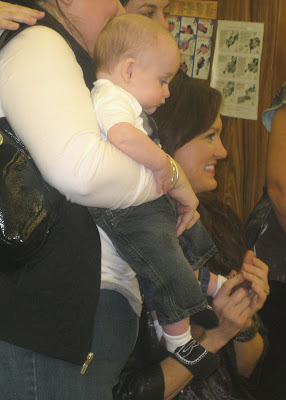 Really, whoever came up with those little socks that look like shoes...just precious. 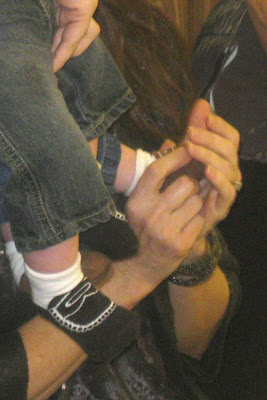 When it was our turn to get in line, we passed the time playing with the toys on the wall. There is nothing like a good Viking hat. Everyone should have one. 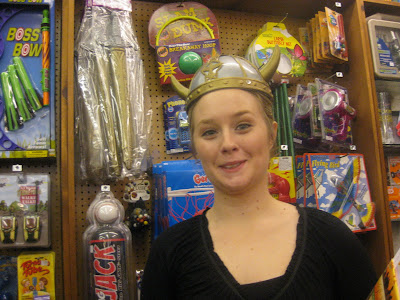 Farm Chick was surprised by a little tug on her hair. 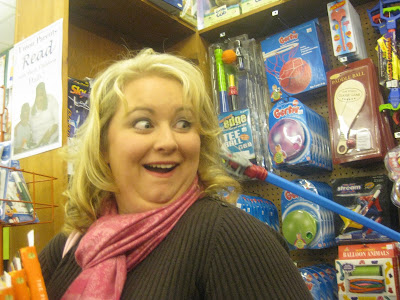 Princess thought it was stinkin' funny to be able to pull her older sister's hair from a distance. If only we had, had this toy when we were kids! 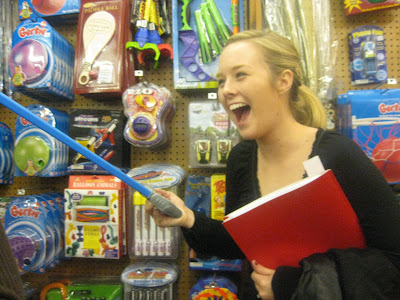 It doesn't take much for us to entertain ourselves. Sad. I know. At this time you may want to say a little prayer for our significant others who have to deal with our cheap humor all the time.

Finally, we got to the front of the line! 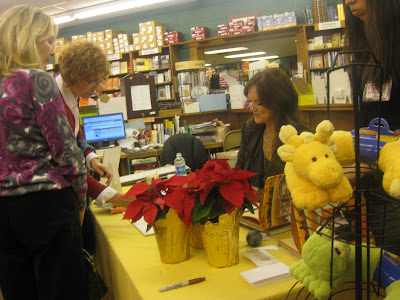 Ree was awesome and signed our multiple copies of her book. She chit chatted with us about our families and sent her best to our missing sister, Rockstar, who is about to deliver our little niecey pants any day now and couldn't make the trip! 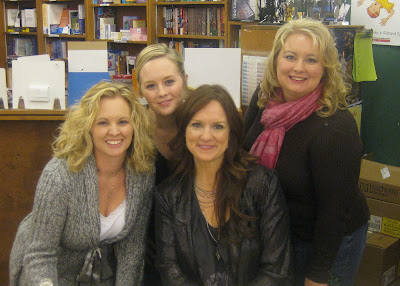 Ree also brought along her oldest punk! I was so impressed with her grace and poise! She seemed comfortable visiting with crazy women, who love her Mom, and graciously signed the page with her photo in our cookbooks! 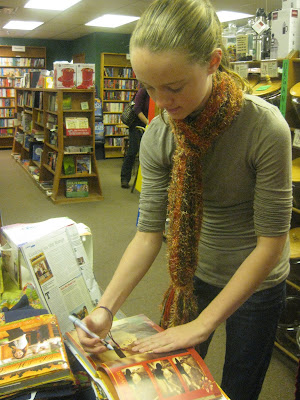 She also put up with us making her take a picture with us! So sweet! 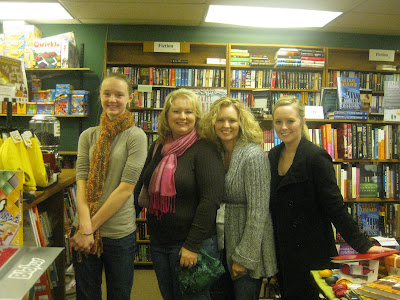 So, thanks to Ree for writing an awesome cookbook and giving us an excuse for a girls day out! 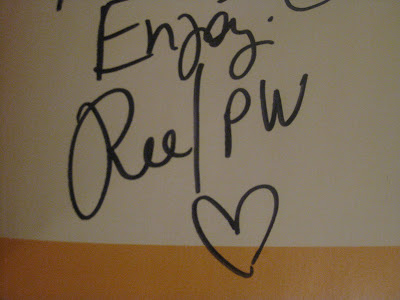 We did indeed "Enjoy!" and I'm sure we will continue to do so every time we cook one of her recipes!
Posted by DW on Saturday, November 28, 2009

What an incredible day! I had so much fun with you wild women. Thanks to EJ and Doc who were super dads today!

P.S. I may or may not be the one worried about the "nervous peeing"

awww that is awesome!! I love her website..So glad you got to meet her!!

You clever girls and your time passing techniques :) Glad you had such a great opportunity for memory making.

Very cool! I know it was great meetng her, but I am a guessin' it was amplified-great because it was with your sisters! You can't reproduce that kind of family fun.

Wish I could have been there...surely there will be a screen play written about Pioneer Woman and you three will be asked to play yourselves in it!