Sometimes you unintentionally expose your children to things that impact their lives and end up in the culture of your family. Thanks to Pretty Princess, who loves Skittles (and yes, I know it is misspelled in the blog title) the following youtube video has invaded our vocabulary and humor and life in general. And yes, I'm kind of ashamed to admit it. "Not a choice favorite." as Trale Lewous would say.

So anyway, Doc picked up a big bag of skittles, of course, because they're "really good" and was going to share them with the kids as a little treat here and there. At some point they (the skittles, not the kids) disappeared. I didn't notice they were gone until Friday night when we had friends over for dinner. The kids were playing downstairs when SG started screaming bloody murder. I ran to the stairs and saw him holding his mouth, coming up the stairs, bawling, with red stuff (which I assumed was blood) streaming between his fingers and down his arm (all while dressed as Yoda). My friend went downstairs to find out what happened from the other kids and I quickly scooped him up, grabbed a washcloth and asked him what happened. He told me he bumped into his little friend and hit his mouth. And as he was talking, I noticed he had something in his mouth. "What are you eating?," I asked. "Skit-tels. They're really good." he said with a grin. Then it dawned on me that that was not blood coming out of his mouth but red skittle slobber. He didn't have any injuries. Just slobber.

Turns out, Bub was hungry the night before and had discovered the bag. He took it in his room and had eaten a few. He kind of forgot about them until his friends were over and being the consummate host that he is, he decided to share with his brother and little friend. They downed the WHOLE bag. 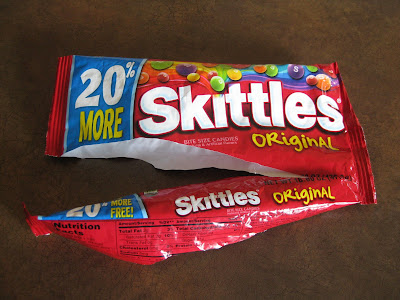 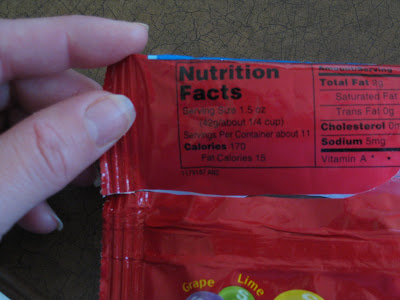 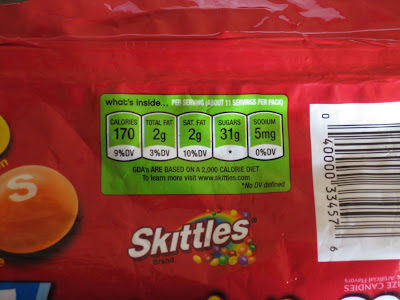 But, on the upside, as Doc's friend pointed out, at least there was ONLY 20% more in the bag! 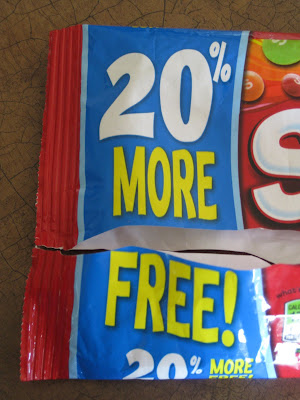 Doc and I were hopeful that they hadn't eaten them all. This was all that was left... 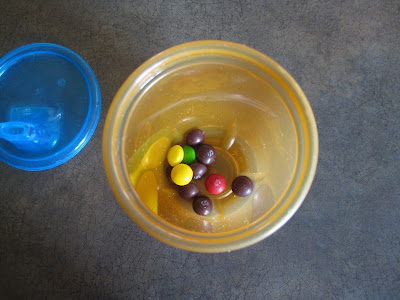 Saturday morning the boys were sitting at the island eating cereal and I looked at the cup and said, "Bub, that wasn't a good choice." He looked at me in all seriousness and said, "What do you mean, Mom? I put them in a cup WITH a lid." I just started laughing, shook my head and said, "I mean EATING THE WHOLE BAG OF SKITTLES, not putting them in the cup!" 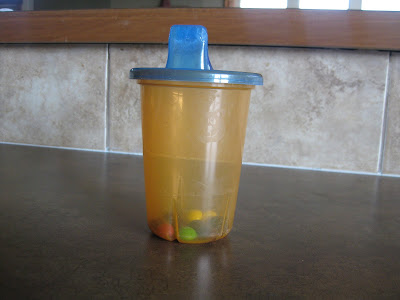 LOL! Oh, my! I think you have two little culprits on your hands now! Bub is training SG well. ;-) He...he...funny stuff!